How long will my translation take? How can I bring documents to you for translation?
Documents can be brought to my office in person or sent by mail to the following address: Dmitri Platonov, Rävala pst 6, 10143 Tallinn, Estonia.
You can contact me even outside regular working hours and on weekends and holidays. In this case please phone to arrange a convenient time and place to meet.

How much does a certified translation by a sworn translator cost? How much is one page of text?
1 standard page = 1800 characters (including spaces) of the translated text.
Most Estonian service providers calculate the final price of a translation this way. An A4 page cannot be the basis for calculating price, because one can fit very different amounts of text on a page. In Microsoft Word, one can calculate the number of characters using the Word Count function: Tools –> Word Count –> Characters (with spaces).

Do I need to legalize or obtain the apostille? Where do I legalize my documents in Estonia?
The legalisation procedure in Estonia is carried out by the Ministry of Foreign Affairs. Please call (+372) 6377 440 for additional information.

What is an apostille? Is it possible to apostille the documents of a private company or individual?
One can only apostille public documents (e.g. birth certificates, diplomas, documents issued by courts, notaries and sworn translators, Tax Bureau documents, etc.) not those of private individuals or companies. In the latter case, when an apostille is needed, a notarised copy is made of the document, and the copy is then apostilled. Another possibility is for a private individual to make a formal statement at a notary’s office and have the notary certify the authenticity of his or her signature, and if necessary also the content of the statement. Since it is a document certified by a notary, it can then be apostilled.
What is a public document?
Public documents are for example:
Does the apostille itself also have to be translated?
An apostille is a standard document that does not usually need to be translated.
The form that is used to apply for an apostille is bilingual (in Estonian and English), and the text of the apostille is in English. See what an Estonian apostille looks like (click to enlarge): 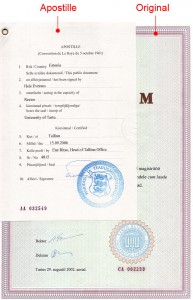 Where and when can one get an apostille in Estonia?
As of the 1st of January 2010, all notaries in Estonia authenticate public documents by apostille. A notary will authenticate documents by apostille irrespective of his or her work area, but not documents notarised or authenticated by himself or herself.
An apostille can be applied for by mail (one can download the form from the webpages of the Chamber of Notaries) or one can come and pick it up in person.
If you do not wish to organise the apostilling yourself, you can entrust that work to the translator for a fee.

How much does an apostille cost?
The state fee for an apostille is 26.84 euros (including 20 % VAT). In the event the apostilling procedure is arranged by the sworn translator, there will be an additional fee for obtaining the apostille.
How long does it take to get an apostille?
According to law, a notary must issue an apostille within 5 working days from the day on which the application was made. Typically, however, the apostille will be ready on the next working day.